Deformed.  It’s a word I’ve heard a lot in my life, mostly in the doctor’s office.  It’s a tough word to hear, even in the sterilized vocabulary of a clinician.  I think, for me, it’s difficult because the internal deformities that form my condition are equally responsible for the major external deformity by which most people make judgments about me: namely, my dwarfism. 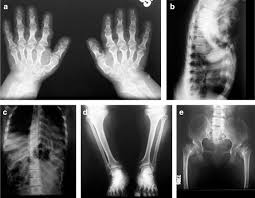 If I were to give you a medical definition of pseudoachondroplasia, it would start with the fact it is growth disorder, – or a skeletal dysplasia – that starts with a mutation in the COMP gene.  The NIH has this to say about it:

Mutations in the COMP gene cause pseudoachondroplasia. This gene provides instructions for making a protein that is essential for the normal development of cartilage and for its conversion to bone. Cartilage is a tough, flexible tissue that makes up much of the skeleton during early development. Most cartilage is later converted to bone, except for the cartilage that continues to cover and protect the ends of bones and is present in the nose and external ears.

The COMP protein is normally found in the spaces between cartilage-forming cells called chondrocytes, where it interacts with other proteins. COMP gene mutations result in the production of an abnormal COMP protein that cannot be transported out of the cell. The abnormal protein builds up inside the chondrocyte and ultimately leads to early cell death. Early death of the chondrocytes prevents normal bone growth and causes the short stature and bone abnormalities seen in pseudoachondroplasia. (http://ghr.nlm.nih.gov/condition/pseudoachondroplasia)

So, if we were to make a word cloud of several medical literature sources discussing pseudoachondroplasia, we’d find the most common words used to describe this condition.  Oh wait, I DID just make a word cloud using several medical literature sources discussing pseudoachondroplasia.  Lookie here:

Very interesting.  Whether or not I limited the number of words to 50 or 100 or 150, the theme remained: mutation, disorder, abnormal, growth, spine, bone, hands, joints, surgery, arms, body, COMP, gene, short, stature.

If we deconstruct the cloud a bit, we can see that there are two things going on: the internal and the external.  There is a lot going on on the inside of my body that you don’t know or see (mutated genes, deformed joints, abnormal bones); but, what the average Joe on the street DOES know is that I’m mutated, deformed, abnormal. I know because I hear different forms of these words almost daily: “weird,” “odd,” “funny-looking,” etc.

I guess what I’m getting at here is that when you hear the medical terminology describing your internal reflecting the outside space in which you move and live, it is almost impossible not to think of yourself this way.  I’m deformed, inside and out.

As a high school student, the part in biology when we would go over punnet squares and genetic mutations would always nudge that part of my brain that knew I was a “mutant.”  I used to throw around that word a ton in high school to be funny, but it was in reality more to deflect any judgments I thought others were already making.

Back to the internal-external discussion… This is something I’ve been pondering lately. What most people see on the outside (the short stature) does not come close to reflecting the internal realities of my body.  That first spark, that mutation, that caused the COMP gene to flip out did cause me to be short, but it also caused all of that other stuff in the word cloud that’s inside my body.  I’m not made right.  I’m not.  Plain and simple.

People sometimes say, “don’t talk like that”; “look on the bright side”; “it could be worse.” I’m not sure what they are trying to say…  I’m not being negative.  I’m not made right.  I’m deformed, abnormal.  I’m a mutant.  Sometimes, I need people to understand the extent of the mess that is the reality of this body.  It’s not about accepting “who I am.” True, I’m short.  Not much to do about it.  But, accepting my short stature is different than acknowledging the daily pain that my body experiences.

I’m going to jump a bit here.  I’m sure this entry feels a little disjointed and awkward, but I promised a dear friend I’d write it by tomorrow, or she’d make me eat a horrid, boring kind of salad, instead of a meal worthy of a foodie.

And, the truth is: I’ve been sitting on this post for a while.  A few weeks ago, someone on FB posted this news story: Standing Tall.  Watch it, or not, but here’s their little, fancy-schmancy description (it’s nice to know that the Australian 60 Minutes is just as cheesy as our own):

The beautiful little kids in this story are just like yours and mine, but for one faulty gene. They’re the one in 20,000, for who statistics on dwarfism become a reality. The impact, is life-long, but now a team of Australian researchers is on the verge of a revolutionary new treatment for the most common form of dwarfism: achondroplasia. It’s a drug that actually grows the bones of children with the condition, and for the first time these kids have a chance of a life of standing tall. In this heart-warming story Karl Stefanovic meets two very special families, and one incredible doctor, who knows what’s it like to grow up a little bit different. (http://www.9jumpin.com.au/show/60minutes/stories/2015/may/standing-tall/)

Now that you’re done reading/watching, you’ll see that there are researchers “on the verge of a revolutionary new treatment” for achondroplasia.  No, that’s not what I have, but it’s not even the news that struck me: it was people’s reactions.  First of all, this was posted in a FB Little People group page, and the poster commented that perhaps there was hope for XXX (a grandchild, I believe), after all.  Here come the comments: “you should lover her like she is”; “you shouldn’t want to change her”; “we’re all miracles.” Blah, blah, blah.  Frankly, I was disappointed.  These were people who should know better.  The outside is NOT the inside. This isn’t growth therapy or limb lengthening; it is a treatment that could positively impact medical issues for those who have achondroplasia; you know: the stuff on the inside.

For a little background, achondroplasia is the most common form of dwarfism (about 80%, I believe), so their voices can overshadow the rest of us.  Compound that with the fact that many of them don’t have severe medical issues, and you’ve got some loud voices talking about acceptance of physical appearance and ignoring some potential pain relief.

So, when I saw this FB conversation, I got a little angry and starting ruminating on this post.  But then some stuff happened.  One of them was about my body.

I’ve been struggling for almost a decade with ankle arthritis.  I’ve worn orthopedic boots for almost 8 years now, so it’s been bothering me a fair amount for at least that long.  It got bad about 3 years ago, and I consulted a specialist who said I needed my ankle fused because there wasn’t even much of a joint left.  At the time, I wasn’t ready for a procedure; I thought I could hold out for a miracle cure… stem cell research, ankle replacements, bionic feet.  And then, I got distracted by getting a service dog and having both shoulders replaced in shortly under a year.

Cut to May.  Reality check.  I’m not fooling anyone: my ankle is fucked.  My lovely husband tells my mom that when I stand “chatting” for a few minutes after I get up from a seated position, I’m really buying time, not admitting that I’m waiting for the pain to lessen enough to be able to stand on my right leg.  He outed me.  Somewhere around that time, I commented to him, “it’s not THAT bad.”  To which he retorted, “you yell in pain when one of the dogs brushes past your foot.  That’s been happening for a while. You can barely cook.  You can barely walk.”  Now he’s calling me out.  Fine.

There it is: deformed.  I’m deformed, inside and out.  The outside, I can deal with.  I’ve got to.  The inside makes me cry and hope for a cure.  When people get all uppity and say you should “accept” yourself, they aren’t seeing the catastrophe that is the inside of my body.  I don’t hear people telling those with cancer, MS, or Alzheimer’s to “accept” themselves.  No, we have Relays for Life, Ice Bucket Challenges, and Alzheimer’s Walks.

Is it really so bad to want a treatment?  I feel like some people in the Little People community equate a treatment or cure with wanting to cure what is really a social issue.  They view it much like wanting to “cure” homosexuality. Dislike of otherness is a social problem, not a medical one.  True, you being uncomfortable with my height and funny-looking body is your problem, and I shuoldn’t have to fix it.  However, there are those of us with veritable medical issues; issues that cause pain, and yes, suffering.  In that case, “Alex, I’ll take Waddle for the Cure for $800.”

I didn’t weigh in on the FB conversation about the video, but I guess this post is an extended reply.  I can live with the height; but the pain, now that I could do without.  I’m facing another major surgery; my third in less than three years.  I’m sick of not having summers (when other faculty get research done); I’m sick of sucking up other people’s time taking care of me (family and friends alike); I’m sick of hurting.  If I had a child with pseudoachondroplasia and someone said, “hey, if your child gets this treatment, the pain associated with this condition will be drastically reduced,” I’d agree.  I’m not self-loathing; I’m realistic.  Pain sucks.

3 thoughts on “Waddle for the Cure”